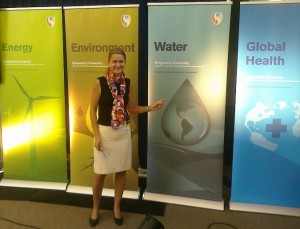 Intersection of water and energy is ancient. Water is critical to production of nearly all forms of energy. Alternative energy sources such are biofuels production requires vast quantities of water: irrigation water demand for ethanol and biodiesel production average ~ 12,300 L/bushel and 20,060 L/bushel, respectively. Algal biofuels water use is not different from other biofuel sources. While considering the gasoline efficiency of a standard light-utility vehicle, growing algae uses between 32.6 and 190 L of water per mile driven on algal biofuel. Manufacturing of a single GE 1.5 MW wind turbine that generates electricity for 1,500 homes consumes ~ 46,000,000 L of water, or 30,670 L/house. The manufacturing of a single integrated circuit on a 300mm wafer for solar panels requires ~ 8,330 L of water in total, of which 5,700 as ultrapure water. 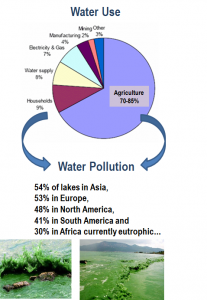 According to the United Nations, in the last century, worldwide consumption of the planet’s freshwater supply has grown at more than twice the rate of world population growth, resulting in an increasing number of regions chronically short of water. Globally, our human pattern of water usage is unsustainable due to increases in population, standards of living and pollution. Presently, 85% of world water is used by agriculture, while industrial production uses 4.4%.

Balancing the needs for affordable and clean energy, for water quantity and quality, and for food security will be the dominant challenge for humanity in 21st century.